Four months into the life of a UO free-shard


So we've been live nearly 4 months. The shard has succeeded beyond our wildest expectations. There have been some problems and incidents, but in general, we've got a well populated, bug and crash free server that is a good representation of, and improvement on, the P25 era of OSI. The population peaks at over 150 clients every evening, recently.

Our original goals were:

AoS as it should have been:


I think we have achieved most of those. The thing I'm happiest about is the community though. Being reunited with old friends and enemies from Europa and Drachenfels, and meeting new friends from other OSI shards, as well as the freeshard community, has been something I have enjoyed massively. The shard has become a bit of a mixing pot from people all over the UO spectrum, which is the key ingredient to a working, real community. Because of the real community, it actually feels like a real shard, something very very few player-run shards ever achieve.

So what for the future?

The focus will be:


Feel free to throw in your thoughts about where you think the shard should head to in the future, its your shard as well.

What you can do to help? ADVERTISE! Vote on RunUO. Spread the word. Talk about Redux on other game forums, talk about Redux on places like Reddit and Something Awful. Also help build the knowledge base. GM'd a skill? Post a guide! Got some spare time? Offer to help mentor a newbie with learning the game. There are hundreds of us here and if we work together, we really can build a fantastic shard that will still be here and thriving in 5-10 years time. Imagine if OSI had taken AoS in the right direction instead of creating SE and ML? That's what we could achieve here. 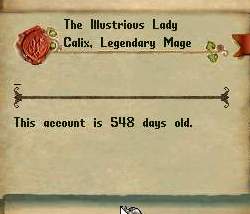 548 days since the shard first existed on my home PC!