Yes, I'm posting again, YES, I'm excited, and YES, I'm going to type random words in caps, because it's 4am and I feel like it.

All you need is a little bit of time speaking to the developers in IRC, and you know they're onto something special here. Then you start delving a bit deeper, and the excitement really begins to build.

For starters, take a look at this: 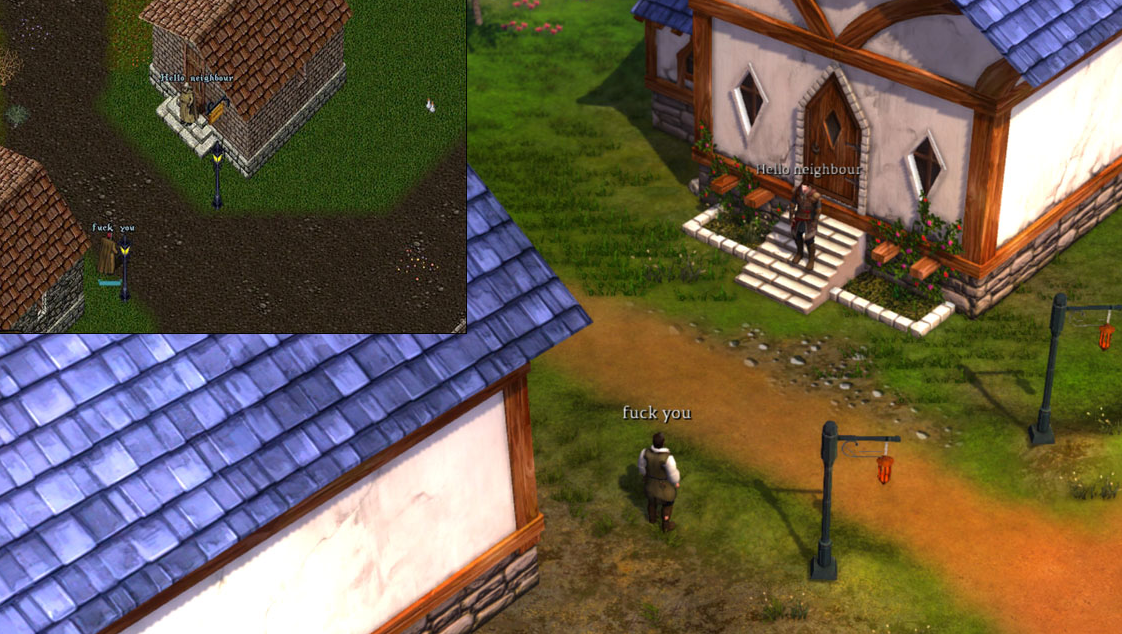 It tells us two things;


Another thing that becomes instantly apparent on looking at Shards: TEXT ABOVE A CHARACTERS HEAD. Yes it's basic, but it adds hugely to that feeling of immersion. How can having text appear in a chat box at the bottom of your screen be the way forward?

Now I'm just going to ramble about why I love everything about Shards so far.

Player housing; I might present myself as a hardcore PvPer in my UO days, but I still spent countless hours decorating my various houses on various shards. SOMETIMES I LOGGED IN AND JUST STOOD AROUND IN MY HOUSE. What that says about me I don't know, but I do know I'm not alone in such behaviour.

I also know that this feeling of ownership in the game is an important part of tying players to it. Anything attempting to replace UO can aim for nothing less than at least equaling the housing system UO offered. No game has even come close yet, it's 2014 and no game has matched a housing system in A GAME RELEASED IN 1997.

Most importantly, this housing is promised in Shards, IN THE ACTUAL GAME WORLD, not an instance. I want to find where my enemies house is. I want to stalk them there and kill them when they venture outside. I want to break in, steal all their stuff, kill their characters, cut their heads off, and post pictures of it on the forums. I also want the possibility that this could happen to me. I want a sense of danger in the world. Other people might just want to go round to their friends house for a tea party and wear hats. They probably use emotes too, the sick bastards. If they don't want me to kill them, they play on a PvE or consensual shard. Either way, Shards works for both types of player.

The developers themselves; They're making a real effort to engage with their community. Yes, I realise this is in their own best interests, and also that this will scale down as the community grows, but when you compare their attitude and accessibility to that of the developers of say, Darkfall, it really is a very refreshing change. The fact that these guys worked on UO, and can answer UO questions I've always wanted answering is something of a bonus as well!

Rulesets: They are promising 3 different types of ruleset on the official Citadel shards/clusters. PvE only, PvP (Consensual only) and PvP+. This is smart, it removes all the problems of the clash between players of different playstyles on the forums, and removes all worry from players of each type, who would otherwise potentially be withholding their interest and backing from the game because they're worried the game is too PvP friendly, or not PvP friendly enough, or whatever. People are hard to please, and this is the best approach.

Shards/Clusters: I know this is confusing a lot of people that are stumbling across the Kickstarter. Don't be confused. Put simply, a shard is a map. A cluster ties these maps together. There will be official, Citadel run clusters, and players can run their own shards, and bind them together as clusters. It's initially confusing because it's actually a completely amazing, mind blowing, unique concept. Genius, in fact. Give players the tools to constantly improve your game once you release it to them. If you look at all the amazing work done in UO player-run shards - then just imagine how much more could have been done with official support - that's the potential Shards has. Limitless, really.

I know there's a long way to go, we're not even in pre-alpha. Make no mistake though, this game has serious potential. There is absolutely no doubt that no other game can claim to be the rightful heir to Ultima Online like Shards can. Anyone trusting that Garriott knows what's he's doing and that SotA is going to be anything like UO hasn't been keeping abreast of how that game is panning out. Darkfall and Shadowbane failed for various reasons, and there is NOTHING else on the horizon - if Shards is anything like promised, there doesn't need to be. If you loved UO, you need to support this game. Pledge on the Kickstarter NOW.

I really didn't think I'd be posting to this blog ever again, but it appears there may be hope on the horizon for those of us still pining for the greatest game of all time, Ultima Online.

That hope is Shards Online.

Shards Online is aimed at both the ex-Neverwinter Nights community, and the ex-UO community, including those that were involved in the huge free-shard development groups based around RunUO and other emulators.

I'm genuinely incredibly excited about this game, even at the current, pre-alpha, limited information stage that we find ourselves in. I'm obviously not alone. The Kickstarter has already successfully funded, within it's first week.

What am I excited about?

Quite simply, Shards offers a community modifiable UO replacement, with infinite possibilities for player-run shards, communities and content. Imagine combining the best of UO free-shards, with the stability and support of the official servers, and mix in a bit of NWN at the same time? That's what Shards offers.

What reminds me of UO?


The devs have already mentioned the existence of things like server-birth rares and IDOCs, they get it!

I've also seen some very promising comments regarding PvP - and these developers have history. The lead designer was involved in establishing a player focus group for PvP improvements that I was involved in. If I remember correctly, he did this in his own time, off the clock - as PvP was never going to get looked at otherwise - we all know where the priorities lay in UO, and it wasn't with us. PvPers; I think this development team actually understands us.

I'll make some effort to post some more updates - what better way to express some of my excitement for shards as we build up for Alpha. On that note, don't miss your chance to get involved in the Kickstarter so you can join us when the fun commences.